Interview with Bertha Lewis
By B. Jesse Clarke

Bertha Lewis is president and founder of the New York-based action think tank, Black Institute and former president and chief organizer for the community organizing group, ACORN. A veteran organizer and powerful public speaker, Bertha has been organizing since the 1980s. The following is an excerpt from a conversation recorded for Radio RP&E on the occasion of Urban Habitat’s State of the Region where Lewis gave one of the keynote addresses to the equity advocates gathered.

B. Jesse Clarke: What does good organizing mean to you and what were the issues that first got you involved?

Bertha Lewis: Well, you know, we’re a membership organization and we organize low- and moderate-income folks. We take our issues from our members and fight on things that affect them. But the fight has to benefit our members and at the same time, move public policy.

For years, people understood that the banks put a red line around black and brown neighborhoods and you couldn’t get credit to buy and if you could, you were exploited. After the savings and loan debacle, we saw that there was something called the Community Reinvestment Act and we created programs where folks were counseled so that they really understood about buying something that they could afford. Our interest was for them to stay in their homes long-term. For years we fought to get banks to open up and actually give credit so that low-income people could buy if they were counseled. And for years we tried to sound the alarm about predatory lending and subprime mortgages because [previously] we could not get credit into our neighborhoods. Then the banks discovered, “Ah, there’s gold in them there poor people’s hills!” and the frenzy around subprime loans and predatory lending [started]. We were railing against it but, of course, who listens to us?

Sure enough, what we predicted would happen, did happen. Here’s what folks don’t tell you about the foreclosure crisis: in New York, we had a one percent default. Why? Because all of our folks were counseled and we always counsel people into buying homes and having mortgages that can withstand any hardship. But they don’t talk about folks [who were] counseled and survived the foreclosure crisis.

Clarke: When you look back at our system, what’s the thing that’s got to change? I mean, the Community Reinvestment Act was supposed to get people into homes. But it was flipped on its head to: Let’s give them a loan package they could never repay and let’s double the price of their house and get twice as much money, and then let’s take it back and sell it for a quarter of the price back to ourselves and then sell it again! It’s terrible. If you had a crooked landlord doing this on a one-on-one basis, everybody would be going, wait a minute now. You sold it first and you sold it twice, and so on.

Clarke: How are we going to change that?
Lewis: Here’s where I think all things come together. Number one, the whole financial collapse came about because there was no regulation and regulations that were on the books were not enforced because it’s the free market and, you know, business needed to thrive. We had a mindset in this country that actually worshipped rich people. So, anything that benefitted making money and rich people was fine. You see this being manifest today. There really is a war on the poor. If we can exploit you, if we can pay you below minimum wage, if we can exploit your labor, then something is wrong with you, poor people. What the Right and those conservatives understand is, there are more of us than there are of them. 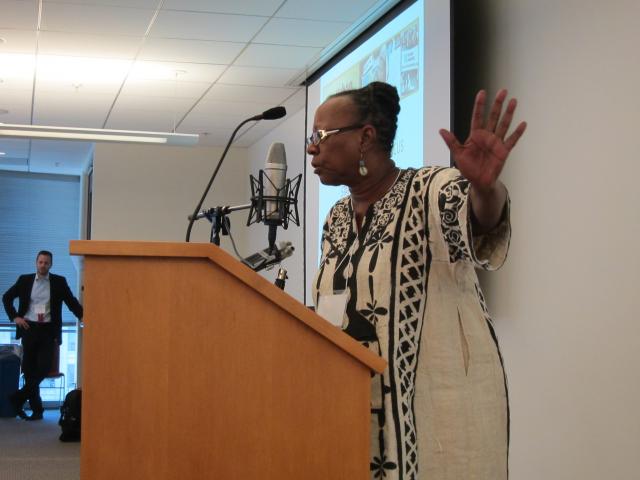 The rise of the Tea Party was not accidental. You’ve got to give credit where credit is due. The day after the 2008 election when the Right lost, they immediately set about organizing… and looking at the 2010 midterm elections. This is why I’m always on a “Wake up, progressives” tour, you know? Wake up, Left! Don’t sleep here because you must organize, organize, organize all the time.

ACORN had the largest voter registration operation in the country. At its height, we accounted for 25 percent of all voter registration. Karl Rove in 2004 put his sights on us because we had a minimum wage ballot initiative in Florida. We registered over a million people and moved those people to the polls based on issues; the issue of raising the minimum wage, not on a personality. Even though George Bush won that state, people who may have voted for Bush also went to the other section of the ballot and voted to raise the minimum wage. That was dangerous. The New York Times published Karl Rove’s emails saying: This is the real danger to the Republican Party and to the Right; we must go after them. So, there ensued AttorneyGate. You remember Alberto Gonzales and the resignation of those U.S. attorneys who said, “We’re being used for political purposes.”

Lewis: It all started with us. So, they had their sights on us for a while and developed a way to go after us. It was really quite brilliant: Take your strength and turn it against you. Discourage these new voters—young people, people of color. We’re hurtling toward being a majority minority country. You’ve got to blunt that somehow.

Clarke: Where are the places you’re starting to see emerge this powerful alliance of communities of color and progressives and women to actually turn this right side up again?

Lewis: Public policy… It’s not just what affects your members, but what kind of policies we put in place that are going to benefit more than just your identified folks—and that’s the key.

Clarke: We need an ‘action tank’ to pick up these policies and present them out there so that this new majority can take them.

Lewis: You know what? What’s good for people of color, what’s good for black folks, is good for America and good for the world. Like General Motors, you know? If we don’t look at stuff from the point of view of black people and people of color here in the United States throughout this, we’re ignoring things that could help our country.

[For the Black Insittute], I decided that we need to have three strategies: (1) Data, research, and polling. There are studies and data that sit on dusty shelves in academia about people of color, about black folks. But there is no company that exclusively polls people of color. We’re always a tab in a larger poll. (2) If you could bring down the data and the research and, as Malcolm X said, make it plain, [you could] turn it into public policy. Train people on how to turn it into legislation. (3) You’ve got to be able to move it on the ground, because you can have all the advocacy in the world and the best ideas in the world, but if you don’t move it on the ground through grassroots organizations and mobilize people around it, it won’t make a difference. So that’s what I want: Research, which is sort of symbolized by the head. Leadership, training and development, signified by the heart. And then, being able to move it on the ground.

Clarke: In closing, I want to give our audience at Radio RP&E a little taste of your remarks at the State of the Region…

We’re here talking about changing demographics, what do you think the Right is doing? Voter ID and voter suppression, the American Legislative Exchange Council, the attack on healthcare and contraceptives, access to healthcare for poor women—what do all these things have to do with each other? Fear of a black planet!

We have an opportunity right now to move people to the polls based on their own self-interests and issues. So, the message is this: If we are the new majority, start acting like it! Let us make sure that electoral politics, as well as real, on-the–ground, knock-on-doors, face-to-face organizing is part of that.

B. Jesse Clarke is the editor of Race, Poverty & the Environment.